BRIDGE OF SPIES simply gets 1950s East Berlin wrong. It was not as desolate and ruined as depicted here. Unter den Linden in the historic city center had been quickly reconstructed, opera houses and state university included. A shiny new city center around Alexanderplatz and the new Stalinallee had also been created by 1957/1961 (the time BRIDGE is set in). For many, East Berlin was indeed a fragile, but hopeful place.

As usual, American pundits and politicians expect too much from demonstrations of power, sanctions against and isolation of Russia, while their German counterparts exaggerate the benefits of talking to Putin by establishing a contact group and attending the G8. Personally, I favor a mix of both approaches, of course. Though, I don't have much hope here and agree with Julia Ioffe's pessimism.

One reason for these different policies on Russia (and China by the way) is that many influential Germans and Americans drew the wrong lessons from important foreign policy successes in the Cold War: Respectively Ostpolitik and the Cuban Missile Crisis. 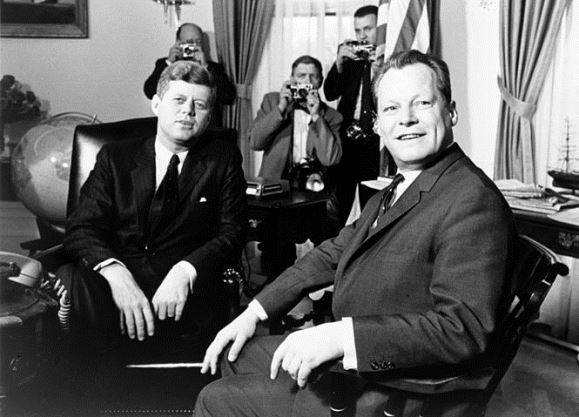 The world's leading defense conference celebrated it's 50th anniversary this year and the debates were fascinating and met the expectations. I have curated tweets from participants and tweeted myself based on the livestream on Saturday. Here's a selection of what I think are the most interesting Tweets on Germany, China/Japan and general history lessons.

This is followed by some criticism about a lack of diversity as well as photos from a panel of 90+ year old statesmen, of four female defense ministers (less than half the age, I guess), an embarrassing selfie from a CEO, and of the demonstration outside.

A Must Read article in The American Interest by A. Wess Mitchell, President of the Center for European Policy Analysis (CEPA) in Washington DC and Jan Havranek, Director of the Defense Policy and Strategy Division at the Czech Ministry of Defense, who writes in his personal capacity.

Although the piece is specifically addressed to US readers and calls for more American leadership, European students of history (of all ages) should read it, including those government officials and politicians in Germany and elsewhere who claim to think beyond the next four years.

"In short, it isn't just Atlanticism that is in crisis; it is the entire paradigm of post-Cold War Europe. The fact that Central European countries are less Atlanticist has not necessarily made them more Europeanist. On the new European map, economic power resides in the east-central core of the continent, in the nexus of overlapping geopolitical and economic interests between Germany and the states of the Baltic-to-Black Sea corridor. This configuration resembles the Mitteleuropa of Bismarck, stripped of its Prussian military overtones, more than it does the federative European vision of Monnet and Schuman, or the Atlanticist vision of Asmus and Vondra. (...)

"Hello Börlin. Thank you, Chancellor Mörkel." Obama charmed the crowd and gave an emotional boost to German-American relations, but I think his political message to Germany was too subtle and has not convinced politicians and citizens.

President Obama said that "freedom won here in Berlin", while he stood behind bullet-proof glass in a sort of aquarium... More than anything he said, it is this level of protection that convinced me that we live in a dangerous world and that we cannot take security for granted and that freedom is precious.

My video is shaky, but I think you will see that the crowd was in a great mood. Yes, it was by invitation only, but still pretty diverse:

Continue reading "Obama Criticizes Complacency in the "City of Hope""

The Times They Are a-Changin: The last 22 Abrams tanks of the US Army have left Germany. From Stars & Stripes:

From World War II on through the Cold War, tanker units were a heavy presence in Germany. At its peak, Germany was home to 20 NATO armored divisions, or about 6,000 tanks, according to the 21st TSC. "There is no [U.S.] tank on German soil. It's a historic moment," said Lt. Col. Wayne Marotto, 21st TSC spokesman.

Continue reading "US Army Tanks Out, German Navy Ships In"

70 years ago today, three members of the White Rose resistance group were executed. From June 1942 until February 1943 they produced and distributed six flyers. Sophie and Hans Scholl were arrested, when they were caught in the act at the University of Munich. They were only 21 and 24 years old.

Today, most of us live in peace and enjoy freedom. Every Blogger, Tweeter and Facebook user has their own "printing press" and considers it normal to share their views. I thought it's worthwhile to commemorating this anniversary. And if you are feeling very happy and want to be sad (for some reason), then watch The Final Days, which was nominated for an Oscar in 2005. The screenplay has used the transcripts from the interrogations, which became available after the GDR collapsed.

In 2003, the public television program "Unsere Besten" (Our Best) polled viewers to select the most important Germans of all time. The Scholl siblings finished fourth place. 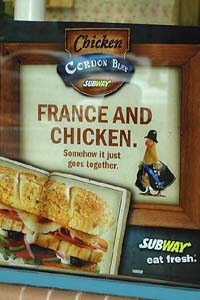 French foreign policy has not changed that much in the last decade, but some prominent US opinions about Paris have.

I am surprised to read the headline "Can the E.U. become the world's policeman?" in the Washington Post. Anne Applebaum's latest op-ed about French policy in Mali concludes that Americans should "stop giggling about cheese-eating surrender monkeys and start offering logistical and moral support. Europe may not be the best superpower. But it's the only one we've got."

Wow. Thanks. But that's too much praise. Of course, the EU will not, cannot and does not even want to become the world's policeman or a superpower in the foreseeble future.

Still it's nice to read this as we approach the 10th anniversary of the transatlantic quarrels over the Iraq war. On January 24, 2003 the NY Post published the Axis of Weasel cover story about France and Germany and a play on George W. Bushs denunciation of the axis of evil. And then there were the Subway ads, which SuperFrenchie campaigned against.

Anne Applebaum assumes that Europe has changed so much since the Libya operation and makes a big deal out of the French intervention in Mali and its context. I think she exaggerates, but she also makes important observations, which will change American perceptions of France:

In other words, the French are in Mali fighting an international terrorist organization with the potential to inflict damage across North Africa and perhaps beyond. Not long ago, this sort of international terrorist organization used to inspire emergency planning sessions at the Pentagon. Now the French have had trouble getting Washington to pay attention at all. Some U.S. transport planes recently helped ferry French soldiers to the region but, according to Le Figaro, the Americans at first asked the French to pay for the service - "a demand without precedent" - before wearily agreeing to help.

Continue reading "What a Difference 10 Years Can Make"

Jörg Wolf and Christian Rieck appreciate feedback, suggestions and media enquiries. About us